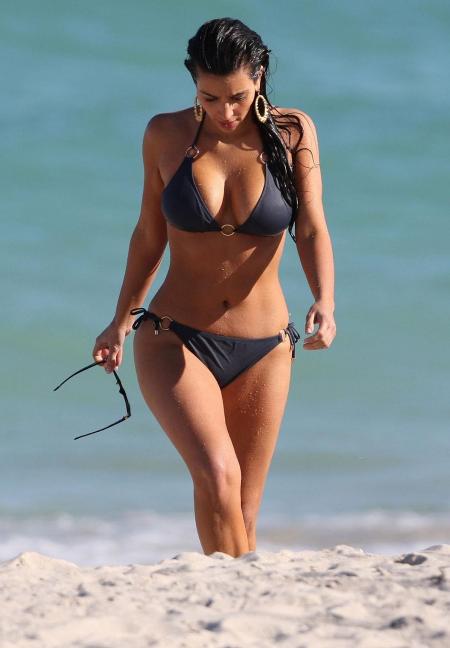 Kim Kardashian is nothing if not controversial.  Her entire brand was built upon the seemingly shaky and certainly scandalous<blockquot foundation of a leaked sex tape. She is pretty much “famous for being famous.”   And, she is hotter than hell. Sorry. I am straight (and happily married), but no one can look at her without thinking “SEX!” … and she knows it.  Have no doubt, people – She is fully aware of what she is selling and just how much it is worth.

And, guess what? It’s worth a ton and, here’s the kicker: It’s hers to sell.  In any way that she likes.  Whenever she wants.  And, she doesn’t need the permission of feminists, or conservatives… or, most of all, parents.  Kim doesn’t owe anyone’s kids anything.  She has 2 babies of her own.  Those children are the people for which she should serve as a role model.  If your daughter is idolizing Kim and loves her nude selfies – that’s YOUR problem, not Kim’s. Kim is not a teacher or a politician or a public servant.  She is a mogul and she is rapidly building a huge multi-faceted business that doesn’t show signs of slowing down.  So, don’t call her dumb. She is many things, but dumb is not one of them. This woman has created a multi-million dollar brand around herself and her sisters, all of whom are beautiful and have a charm that can be hard to pinpoint.

I remember watching the family’s interview with Oprah a while back. The talk show host was skeptical of them and seemed to have some of the same doubts about their “right” to be stars that many of us “normal” people do. But, backstage after the interview, Oprah said, “I get it now. I see what their fans see.” (paraphrasing here)  Because, love them or hate them, they have a sincerity in the way that they engage with the world that you really can see.

Yes, it’s reality TV and yes, it’s often staged.  But, their interactions as sisters and friends, their relationships with their mother, with Caitlyn Jenner, and with their kids and spouses feel authentic. The audience buys it. They feel like they could be our families, or our neighbors – if they weren’t decked out in Givenchy, that is.  So, the show is right on par with plenty of other decently produced reality shows. It’s OK. It has its moments. It’s documenting a part of our current culture.  And, whether we are happy about it or not, it isn’t going anywhere…

But, the controversy is less often about the show than it is about the gossip surrounding them, the selfies they take… and, of course, their Twitter feeds.

So, you already know that Kim posted a “nude” selfie last week. It wasn’t even nude, by the way.  She, of course, censored it so that in the finished product she essentially looked like she was wearing a bathing suit. In my most humble opinion, I don’t even really see what the big deal was. But, holy crap, was it a big deal… and it still is.

I mean, there is a mural of it in Melbourne (already).

But, Can I ask you a question?  Did you know that less than a year ago Kim posted a nude selfie with just her hands over her breasts and a leg covering her crotch area?

No? You didn’t hear?

Because she was pregnant when she posted this picture:

So, I guess that was OK.  Maybe it was OK because it seemed to be a message to pregnant ladies, and moms.  Or maybe fewer eyes were batted because her sexuality was “toned down” by her big, plump belly.  But, whatever the case, I don’t think Bette Midler, or Pink, or whoever else had anything to say about it.

Those who did talk about it were overwhelmingly positive and praised her for being open about body image struggles and weight gain during pregnancy.

But, when she lost the baby weight and was feeling good? Oh no no! Now, things have changed.

#bodypositivity is everywhere these days.  But, you aren’t allowed to be positive about your body if you fit the norms of beauty.  If you are pretty, it seems, you need to be quiet and grateful for your body but keep it under wraps. It’s all very confusing.  These “rules” change all of the time.

Kim Kardashian has, in essence, created a whole new beauty norm, by the way.  I don’t know if anyone can remember past 2 weeks ago anymore, but I remember a time when the socialite on the scene was Paris Hilton with her long, lean, willowy body.   At that time, she represented the norm of beauty for a lot of girls.  It was a limiting norm that kind of sucked for a lot of teen females.

But, then, Kim came along and busted through walls with her boobs and butt.  And, everyone was pretty pumped.  It was cool to have a darker skinned, dark haired, ethnically diverse, curvy sex symbol to admire.  You don’t have to call what she did brave if that is too much for you.  But, you have to admit that the girl came out with guns blazing and created a new image of what sexy could be.  She was the precursor to Ashley Graham on the SI cover. Like it or not, that’s the truth.

But, here is what it all boils down to…

Kim Kardashian is beautiful.  She knows it.  She uses it to her advantage.  She likes her body.  She feels confident and sexy.  And, she is rich as hell. So, she has become a threat to a lot  of women. She is no longer the “underdog” representing the the thick girls. She, in and of her self, represents contemporary beauty.  She, in many ways, IS modern beauty and style.   We all want to be her.

So, now that she is on top, the mean girls are ready to pounce. That’s really what’s happening, right? We’ve all been to high school.  We know how this works.

One thought on “No Pretty Girls Allowed?: The Body Positivity Movement & Kim Kardashian”